We talked with Goktug Yilmaz, co-founder of Colonist.io. He started the company two years ago, together with his partner Demi Yilmaz. He’s based in Toronto, Canada but the company is distributed across the globe.

Colonist.io is a brilliant and challenging web based board game that positions itself as an alternative to the highly popular Settlers of Catan board game. You take on the role of a colonist and you must build a civilization and expand your territory.

In this interview, we discuss how Feature Upvote allows them to be more user-centric, and collect user feedback effectively so they can reduce the noise and build the features their customers love the most. Let’s dive in!

What problem were you facing that led you to try Feature Upvote?

As we grew, we started getting a lot of feedback from a lot of different platforms. Our previous methods did not scale to our feedback volume. We needed a platform where our users could create issues, comment and vote.

How did you track feature requests before using Feature Upvote?

At first we collected feedback in a private github repository. However this method got really difficult when we had hundreds of issues and some of them had 20 comments. We only had time to complete the issues with a lot of comments.

What have you discovered about your product by using Feature Upvote?

The seriousness of issues. Sometimes a very passionate user mentions an issue, but then I look at our Feature Upvote board and discover that the issue only has five votes. Meanwhile there are multiple issues with hundreds of votes that need to be completed first. 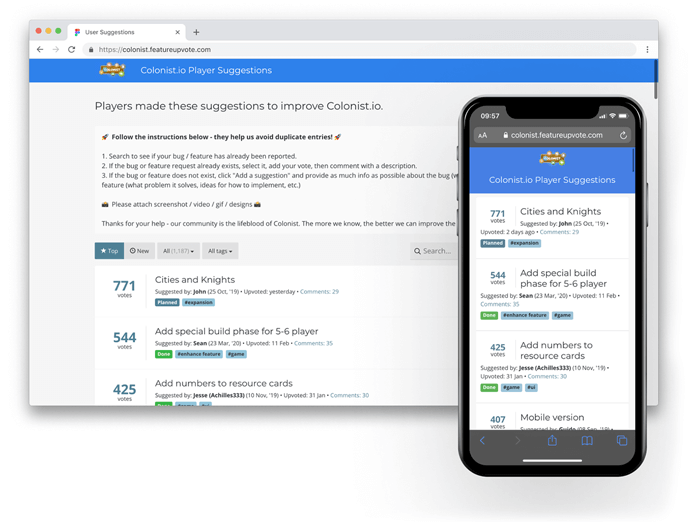 What specific feature do you like most about Feature Upvote?

The anti-abuse features, such as tracking the users’ IP addresses and automatic spam detection. It allows us to open up our suggestions page to users without them needing to sign up, which increases the volume of feedback we receive.

What unexpected benefits have you found when using Feature Upvote?

It creates a product roadmap for us. Now the meetings aren’t about, ‘what should we work on?’ but ‘how do we solve this problem?’.

Would you recommend Feature Upvote? If so, why?

Yes definitely! If you are a user-driven company, you should use Feature Upvote.

Create your own feedback board