Simple and modern alternative to UserVoice

Feature Upvote is a simple and modern alternative to UserVoice for collecting and organising customer feedback. We compare the two looking at price, approach, ease of use and target customers.

A lot of companies have sprung up promising to help you listen to your customers and organise valuable feedback. One of the oldest of these is UserVoice founded in 2008. Feature Upvote, in contrast, is a more recent addition to the market, founded in 2016.

Both companies basically help you with the same problem: how can you collect and prioritise customer feedback in an easy and helpful way?

Their approaches, however, are different. UserVoice has a raft of features and functionality mainly aimed at enterprise clients. Feature Upvote, in contrast, aims at a broader cross-section of companies (including some enterprise) who want a simpler feedback solution.

UserVoice as a feedback solution is broad in scope. It offers you three ways to collect feedback: using a web portal for customers, an in-app widget and a side bar for your customer support team.

A screenshot of a public-facing Uservoice web portal

This feedback then all ends up in a private admin console where “the options are endless” in terms of analysis, according to their sales development manager Amanda Puzin.

UserVoice also provide a roadmapping section – almost a different product - where you manually create new features that can then be linked to existing suggestions in your admin console.

Feature Upvote, in contrast, is a much simpler product. Instead of being a collection of widgets, interfaces and sidebars it provides a feedback board (or a number of feedback boards) which is used and viewed by everyone – and can be made public or private through a password or Single Sign-On. 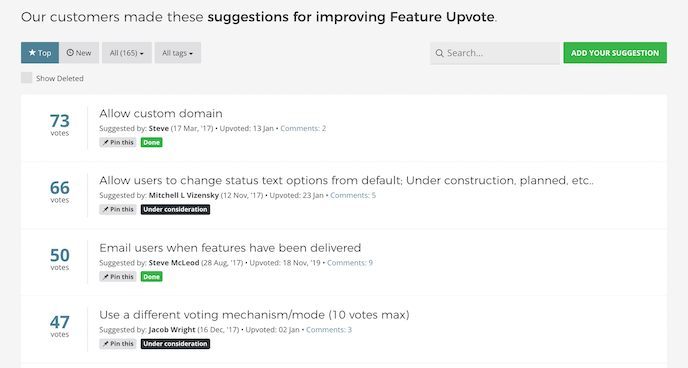 A Feature Upvote feedback board.

As you’d expect from a company that has Microsoft as a customer, UserVoice has premium pricing. They don’t publish their prices, but this is a quote from Quora:

“Our product management product starts at $499 [a month] because it’s something that’s most valuable at scale hence the higher pricing.”

It also seems likely that you’ll need to pay extra for add-ons such as a custom domain name. UserVoice doesn’t offer any discounts.

Feature Upvote, as a simpler product, has a lower price point. The price per board is $39 a month if you pay annually or $49 if you pay monthly. A customer domain name is included as standard, as are unlimited team members and contributors. See Feature Upvote pricing. 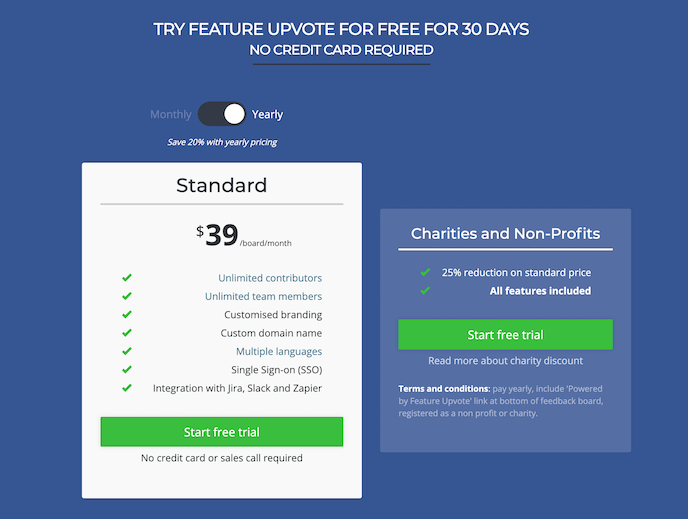 However, Feature Upvote doesn’t include roadmapping functionality. Prices for roadmapping tools like Roadmunk and Aha! start from about $50 a month.

Getting started and ease of use

UserVoice is a complex product with a lot of functionality and potential customisations. This is one of the reasons why they don’t give out their pricing. It depends on what setup you need. So although you can’t quickly get started with a free trial, you can expect a ‘high touch’ sales approach that is very helpful if you decide to buy the product. You can expect assistance with onboarding and generally getting the most out of the product.

Feature Upvote, in contrast, prioritises ‘self-service’ onboarding. This means you can get started with a free trial in about 5 minutes without entering any card details. However, you don’t get any ‘handholding’ during onboarding, although there is good email support.

In terms of ease of use, UserVoice has its challenges. Partly this is simply because it is a complex product that dates back many years (even before responsive design), although the team have worked hard to modernise the experience.

Feature Upvote, as a simpler and more modern product, prioritises ease of use for both clients and their customers. For example, key functionality is available to admin and moderators simply by selecting a suggestion, as well as through the dashboard. 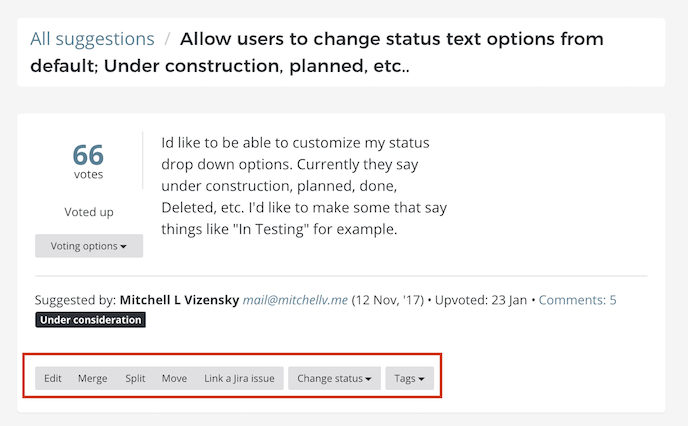 Admin can take certain actions from inside a suggestion

UserVoice offers an impressive amount of functionality and customisation options.

As mentioned, you can pull in data using a portal, widget or sidebar. However, the admin console is the powerhouse of the product, and allows you to slice and dice customer data in different ways. You can see whether a particular suggestion will benefit a key market, how many accounts will be affected by a new feature, or how much revenue it might generate. The Salesforce integration also lets you pull in opportunity data.

Feature Upvote concentrates on core functionality as a way of maintaining ease of use. So instead of collecting feedback using a portal, widget and sidebar, Feature Upvote just points everyone – you, your sales team, your customers – to the one feedback board. So if a customer has an in-app button saying ‘suggest idea’ this would lead directly to the branded feedback board, rather than bringing up an on-page widget.

Feature Upvote offers less in the way of analysis. There is no separate admin area where you analyse data. Instead, feature Upvote makes it very easy for you to track what they see as the most important metric – how many votes a suggestion gets.

In turn, contributors can quickly see what has happened to their suggestion: ‘done’, ‘under consideration’, and so on. 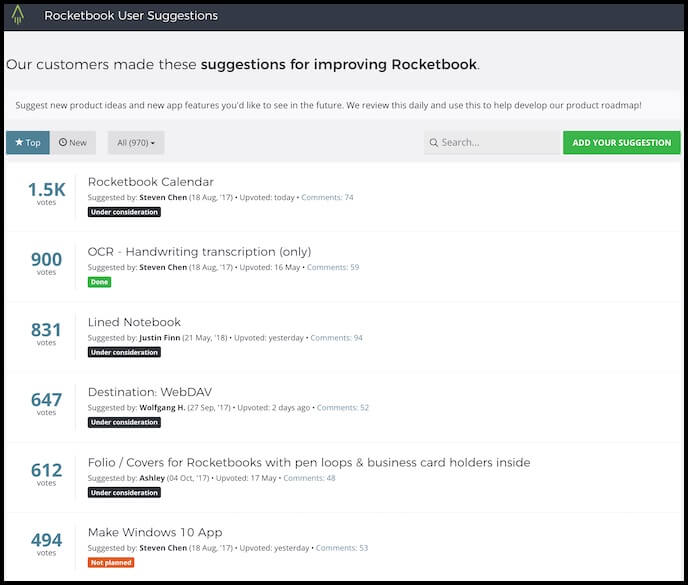 A feedback board provided by Feature Upvote

UserVoice offers a wide range of integrations so you can connect the software direct to other systems across your company. This is important because UserVoice aims to be the main product you use for customer feedback and roadmapping. In some instances, it will replace or overlap with some of your existing software.

Feature Upvote, with its narrower product scope, offers fewer direct integrations. As a product, it tends to fit in with your existing systems rather than replace them. Integrations include Slack, Jira and Zapier. The Zapier integration means that you can effectively connect with 1,500+ apps.

Customers and use cases

UserVoice is mainly aimed at medium to large companies that want to organise and analyse customer feedback. They concentrate on appealing effectively to that market.

Feature Upvote has broader appeal, with customers including bootstrapped startups and charities as well as a few enterprise companies. As a simple product, it can also be used in different ways. Although many companies use Feature Upvote to collect and organise customer feedback, others use it for internal idea management or even hackathons.

Convergint Technologies is the largest systems integrator in the world. They have 9 Feature Upvote boards (all Single Sign-On) that they use to crowdsource feedback on internal tools.